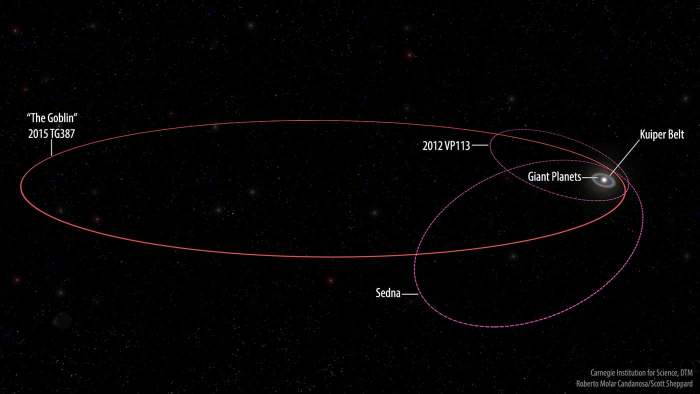 -He: First, there was less than nothing.

-She: The universe began with a contraction.

-She: Then, and only then, everything exploded.

-She: I cannot read. Try to get closer.

-She: Stop, that’s fine, I can read it now. It says: “We are attempting to survive our time so we may live into yours”, by –  by “US president Jimmy Carter.”

-She: Did they survive?

-He: Did you check the system?

-She: I did. The data are correct. This is the Moon.

-She: Indeed. In 1999, a thermonuclear explosion knocked the Moon out of orbit. Since this dramatic event, Moonbase Alpha inhabitants drift in the dark universe.

-He: Holy smoke. The Moon became a spacecraft.

-She: And the Alphans nomads.

-She: If we go far away in this direction, we will reach the limits of the universe.

-He: The universe is an hypertorus: it seems bigger that it really is. Every crossing of its limits will take us back to its opposite side. If we go West, we will return along East.

-She: 51 Pegasi b is unofficially named Bellerophon.

-He: Bellerophon is unofficially named the Chimera’s Lover.

-She: Chimera is unofficially named the Virtual Universe.

-She: We are entering the wormhole.

-He: Activate the Shield.

-She: Open the gate.

-She: Feed the worm.

-He: Discard the spice.

-She: Welcome to Arrakis.

-She: Clouds on the horizon: it might be a black hole.

-He: Black holes don’t bite if we don’t stare at them.

-She: Let’s host the infinite gravity.

-He: Let’s receive the Host.

-He: The gravitational pull is too great. We cannot escape.

-She: What did you say? Speak loudly.

-He: I said: we cannot escape.

-He: We are beyond the event horizon.

-She: It’s so dark. Did you switch off the light or what?

-She: We come alongside the ideal Planet.

-He: I doubt: the ideal planet would be twice as massive as the Earth; plate tectonics would keep muddling up its crust, and the light would be orange.

-He: Yes, the ideal planet would be orange like a cornflower.

-He: The rings of Saturn stopped turning around their God.

-She: It’s an optical illusion.

-He: The stars are falling apart.

-She: It’s an anxiety attack.

-He: Robots have no feelings.

-She: But the feelings have their robots.

-She: Listen closer, get out your no body: it’s a yelp.

-She: They escape Atlanta. Too dangerous. Too many zombies.

-He: There is a legend: zombies are actually humans.

-She: There is a counter-legend: zombies ate the Earth and threw it up.

-He: The Aral Sea is dead. Heavily polluted. Evaporated.

-She: No, the Aral Sea came back to life. It’s more alive that you are.

-He: My life is brighter than a fish. I think that you do not love me.

-He: Let me merge in it. Now, I can feel what it feels. It’s – like – greening the sun, drinking the sky, hosting the world.

-She: It’s a Centaurea cyanus, aka cornflower.

-He: I object: plants have no name. They bloom because they bloom. Period.

-He: I’m not sure. What is your thought?

-She: The wolf’s spirit spells the human brain.

-She: It resembles an immense snake uncoiled, with its head in the sea, its body at rest curving afar over a vast country, and its tail lost in the depths of the land.

-He: You keep forgetting that a robot cannot access the Symbolic Order.

-She: Fuck your Order.

-He: Otis Redding died in this lake, Lake Monona.

-She: Did they find the cadaver?

-He: No, they found a cosmic anomaly called the soul.

-She: The soul is the ghost that a machine invented to forget its inexistence.

-She: We are at the center of the Earth. A space for a paradise lost.

-He: But the tears did not extinguish the fire. They fed it. Dialectics. Moving dialectics.

-She: The sun’s love keeps the flame alive.

-He: If it’s a Trojan Horse, you risk shutting down.

-He: I cannot kill what is not alive.

-She: Then give it life. And kill it.

-He: This crystal is atypical. It left the Earth’s bedrock.

-She: Stay quiet. It’s a sleepwalker.

-She: If we come into being, the world will go up in smoke.

-He: When the child was a child, he was trying to catch the dust in the sun.

-She: But the dust was hiding in the light.

-He: Then the child built a trap with the shadow of the Earth.

-She: Then the dust became lust.

-She: Once upon a time, a King became a stick insect.

-He: Your legend is quite short.

-She: Do you need more time to understand the law of transformations?

Cindy Terrafere is an independant scholar and poet based in Cairo. Co-founder of the Center for Alien Studies, she works on a collective book entitled: Critique of Geological Reason.