In 1827 British scientist and inventor Charles Wheatstone published the results of some of his earliest studies in the transmission of sound. Familiar with the work of Ernst Chladni who in 1787 methodically demonstrated and documented the symmetrical patterns of sound vibration on bowed metal plates and with similar studies of wave motion in strings by Thomas Young in 1800, Wheatstone designed a device to obtain a cross-section view of what he termed “complex vibratory motion.” He fixed a steel rod roughly 12” long to a solid wooden base and, as the rod was bowed or struck with a mallet, he carefully recorded the movements at the tip of the rod. To facilitate viewing these intricate patterns he fastened a small glass bead to the tip and directed a light source onto it so that the movements could be perceived as a solid line. Drawing an analogy with an optical toy recently invented by his contemporary David Brewster, Wheatstone coined the term kaleidophone for his invention, ‘phonics’ being a commonly used term at the time for studies related to sound transmission. 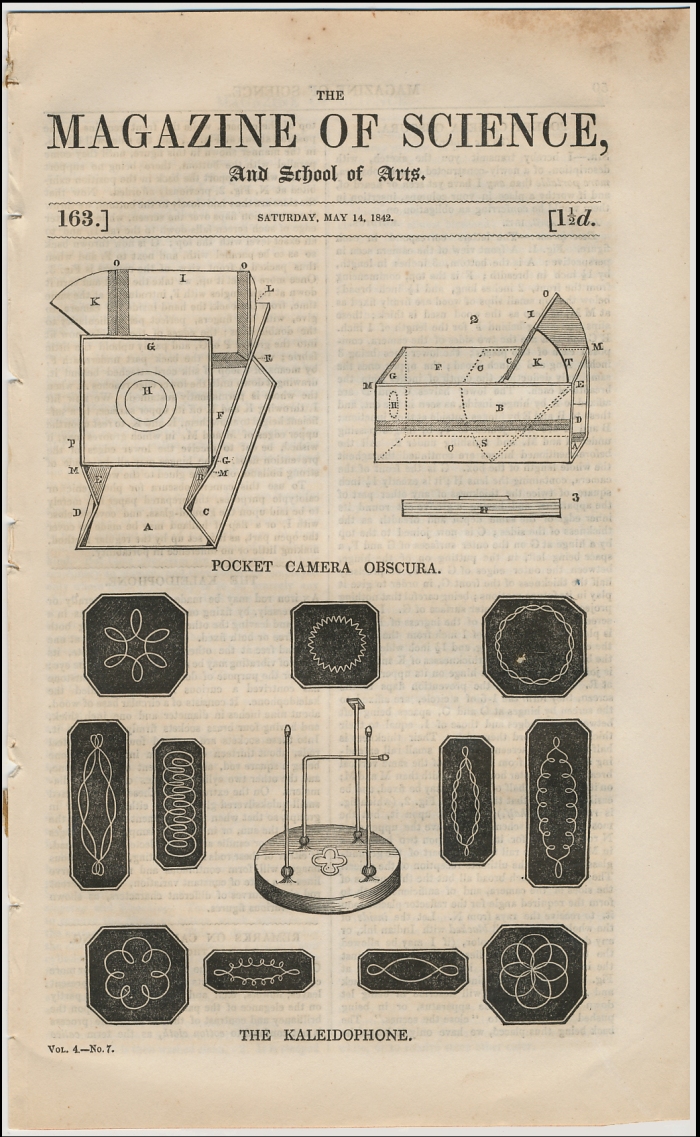 The paper outlining his studies includes an engraving of a kaleidophone with four different rods attached: one cylindrical and one square, another mounted with an angled mirror, and a fourth bent at a right angle to compound its movements when struck at different angles. The kaleidophone as described by Wheatstone and sold commercially into the later 1800s thus demonstrated many different forms of vibratory oscillation.

Basic to the kaleidophone is its single metal rod which may be attacked from any angle and at any point along its length. Here it distinguishes itself from other bowed or struck idiophones which limit the manner in which a rod might be subjected to input. The keys of a mbira must be plucked in a downward fashion like the tines of a music box comb. The rods of a waterphone may only be bowed or struck perpendicular to their length though this may happen at any point from base to tip. The freedom to generate movement from any direction on the kaleidophone’s rod facilitates remarkable complexity to the motion of its distal tip and, as a purely visual “philosophical toy” (in Wheatstone’s words), the actions are not directed to produce particular sounds, rather the device is ‘played’ to produce intricate patterns. Clearly Wheatstone learned to play the kaleidophone: “On varying the mode of excitation, by striking the rod in different parts and with different forces, very complicated and beautiful curvilinear forms may be obtained.”

Wheatstone’s paper describes the most readily observed pattern of the kaleidophone’s motion. Striking the rod with a mallet approximately one third from its base:

“… the track will commence as a line, and extend as the larger axis diminishes, until it becomes a circle; what was before the lesser will then become the larger axis, and thus the motions will alternate until, from their decreasing magnitudes, they cease to be visible. In the case just described the ellipses make a right angle with each other; but by altering the direction of the motion so as to render it oblique to the direction of the pressure, they may be made to intersect under any required angle, and when this angle = 0 the motion will be merely vibratory.”

As with every other invention and subject of study (e.g. the stereoscope, the electric telegraph, the English concertina) Wheatstone’s research was thorough and engaging and not always restrained by the practical or potentially lucrative. Wheatstone’s immediate contemporaries were David Brewster, Robert Fresnel, Michael Faraday, and many others at the intersection of natural philosophy and scientific theorizing into the nature of sound, light, electromagnetism, and gravity, a flood of ideas both speculative and mathematical that set in motion all that most immediately identifies our modern world. 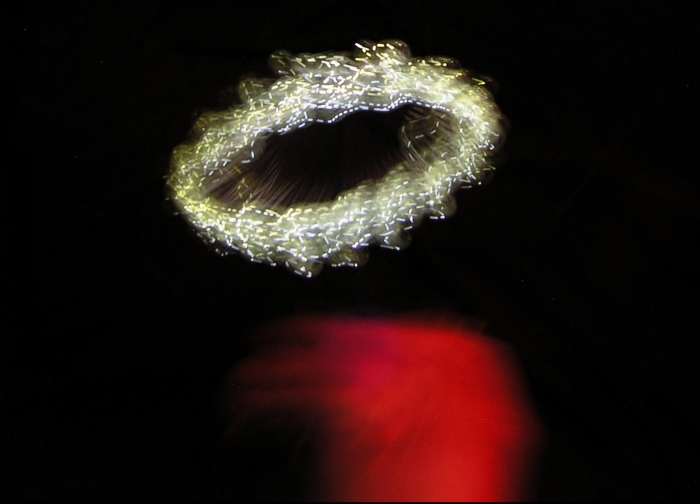 Fashioning a kaleidophone in the simplest fashion, a thin brazing rod fixed to an immovable base with a bead of melted glass at the tip to be photographed from directly above under the light of an assortment of LED flashlights, I set these patterns in motion and, as a smoothly formed ellipse steadily contracts, strike from an opposing angle and elevation, interrupting its graceful ellipses to generate the most unexpected shifts of microtonal pulses and visual harmonics, a visual analogy to overtones from a range of attacks that modulate the otherwise monotone palette of such a limited sound source. Slight variations in the camera’s shutter speed illuminate even more surprising deflections and fluctuations otherwise invisible to even the most attentive eye’s persistence of vision. Viewing Wheatstone’s published drawings of the patterns that fascinated him, so often reminiscent of Chladni’s engravings, he must have felt some constraint to focus on the regularity of these complex designs. 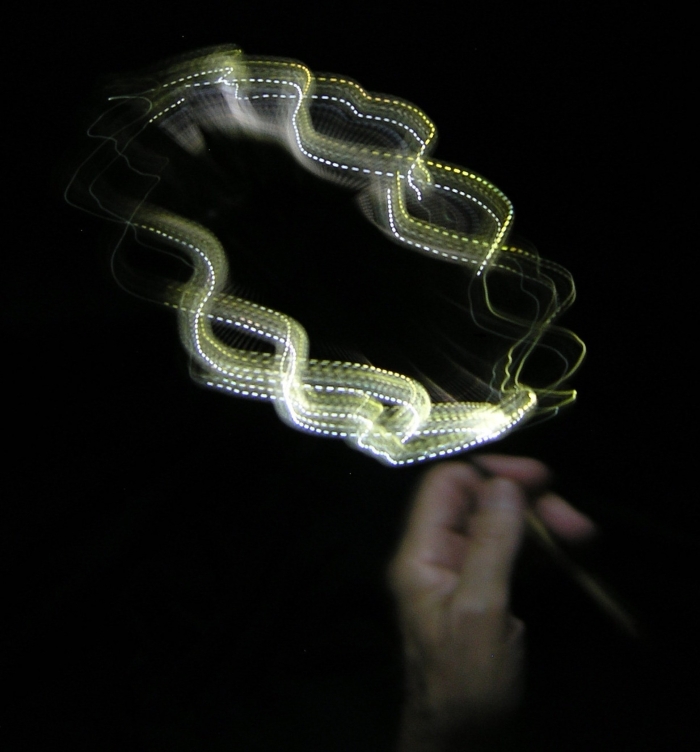 As a musical instrument of such simple means only the ‘finger gong’ employed by Nadi Qamar comes to mind but amplification is the essential ingredient to harvesting its rich bass tones. Harry Bertoia’s sonambient sound sculptures are a further innovation, but only clusters of rods of uniform length produce enough force to create an acoustic version of this phenomenon. The wobbliness of the tips of Bertoia’s instruments equate with the antic movement of the kaleidophone. The proximity of other rods creates the clatter characteristic of these sonambient structures but also limit their free-range display. 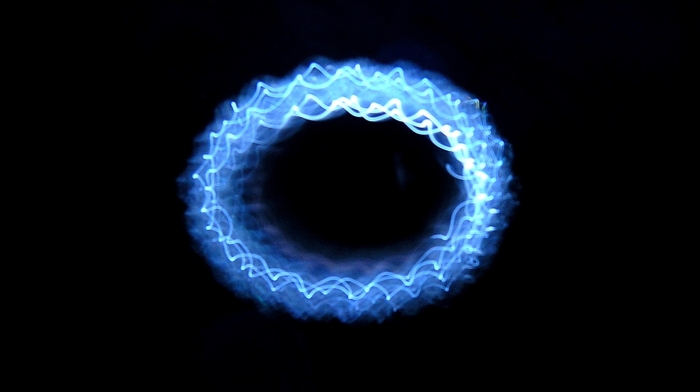 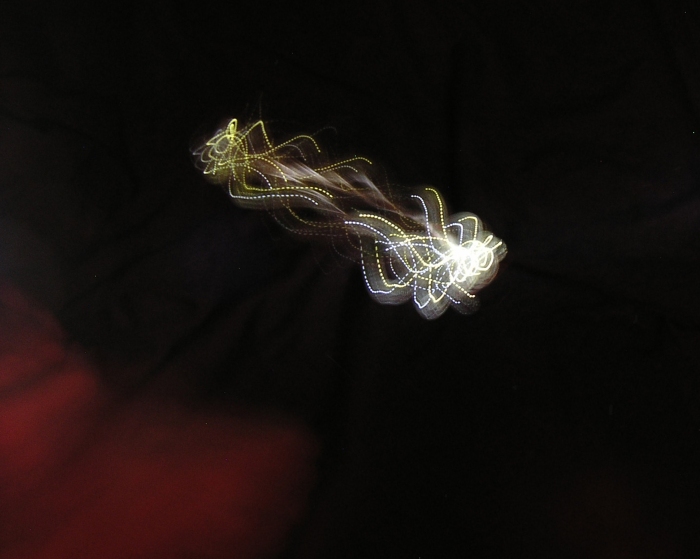 The displays made visible with a kaleidophone are dazzling and mesmerizing and a camera catches more than the eye in real time. In 1827 photography was more than a decade away and the existence of film with enough sensitivity to capture motion was still further in the future. Kaleidophones were parlor entertainment and, as scientific instruments, variations on its design suggested new methods to study compounded vibratory systems. As science moved toward more technically sophisticated means of visualizing and understanding sound waves (e.g. Jules Lissajous’ mathematical studies of these specific curves in 1857) the kaleidophone became only a brief introductory chapter in the remarkable sequence of inventions and ideas Wheatstone pursued.  Today, some 90 years later, the free movements of the kaleidophone “subjecting to ocular demonstration the orbits or paths described by the points of greatest excursion in vibrating rods” vividly reveal its marvels and share the humble contributions it has made to understanding our vast universe of vibration. 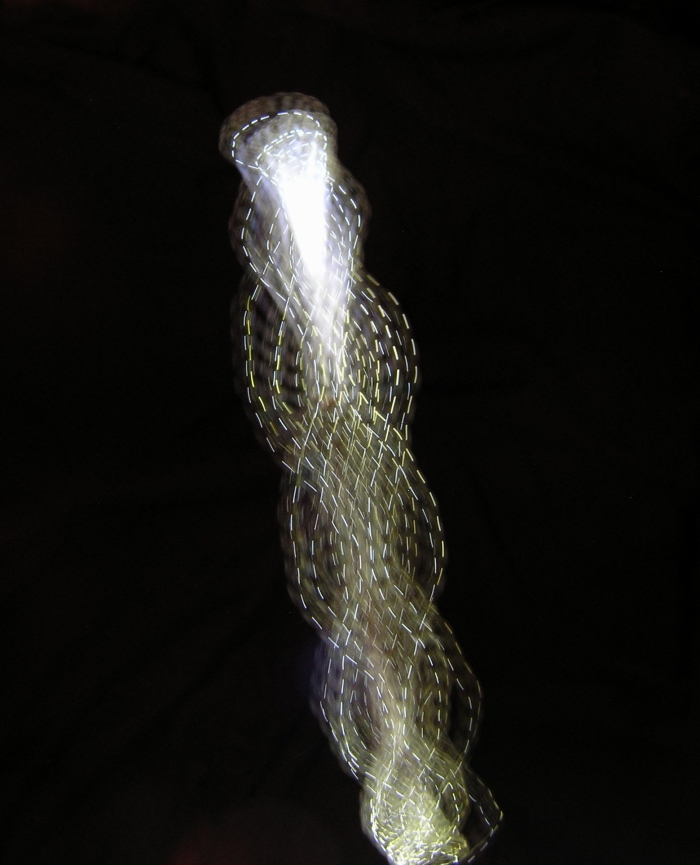 Epigraph by Thelonious Monk appears in comments to Hall Overton recorded on tape by W. Eugene Smith during rehearsals for his Town Hall concert in 1959.  From “The Jazz Loft.” Directed by Sara Fishko. New York: Kino Lorber (dvd), 2018.

Hal Rammel is a visual artist and musician whose work as a photographer focuses on pinhole photography and a wide variety of cameraless alternative processes. He is curator of music programming for Woodland Patten Book Center in Milwaukee and is an active participant in Milwaukee’s experimental and improvised music scene. He has published several books of his photographic work including “Paths to Resemblance: Eight Photographs for Henri Michaux” and “A New Radiance: Twelve Photographs for Lafcadio Hearn.”